Napoleon escapes from Elba
“The tiger has broken out of his den”, so began a broadsheet circulated in Paris in April 1815.

Napoleon and a small force of around 1,000 men left the island of Elba on 26 February 1815. They landed in the south of France, near Antibes, on the 1 March and from there made a rapid advance through France to arrive in Paris on 20 March. Napoleon was received in triumph in the capital, and swiftly re-established himself as ruler of France: the hundred days of his new rule had begun. On receiving news of his escape and progress, the representatives of the allies meeting at the Congress of Vienna, were decisive and united in their response, firstly they declared him an outlaw and then signed an agreement to supply troops to oppose the man they called their “common enemy”. With both sides gathering together forces, the road to conflict — which culminated with the clash on the plains of Waterloo on 18 June — was set.

Using material from the Special Collections, such as the Wellington Papers, at the University, this blog will focus on some of the significant dates on the road to the battle of Waterloo and on the events in the aftermath leading up to the restoration of Louis VXIII in July.

The Duke of Wellington, who was the British representative at the Congress of Vienna, received the news of Napoleon’s escape from Lord Burghersh on 7 March. He notes in a letter to Lord Castlereagh, the British Foreign Secretary, of 12 March 1815, the united response of the allies to support the Peace of Paris, which restored to Bourbons to the monarchy in France :

“We received here on the 7th inst[ant] a dispatch from Lord Burghersh of the 1st giving an account that Bonaparte had quitted the island of Elba with all his civil and military officers and about 1200 troops on the 26th of February.

I immediately communicated this account … and I found among all one prevailing sentiment, of a determination to unite their efforts to support the system established by the Peace of Paris…

Posted in Road to Waterloo

Exhibition: ‘Music hath Charms’: the musical life of the University

Music as an academic subject has formed a part of university life since the early days of the Institution, growing from a small department in the early part of the twentieth century to the international faculty of today. Since the inception of the Hartley Institution in 1862, the University Library Special Collections has acquired a select range of collections relating to music that support research activities: the most significant manuscript collection probably being that of the conducting scores of Gustav Mahler.

Musical activities, particularly in terms of social events and performances, also have been a regular fixture of University life. Groups such as the Southampton Operatic Society and the Choral and Orchestral Society have performed shows at the University for decades, while the Student Union has been the hub of musical entertainment and social events, with many major bands and performers appearing. The construction of the Turner Sims Concert Hall on campus in the 1970s added a further dimension to the musical life of the University, providing a purpose built performance space for professional concerts as well as for teaching.

Drawing on the Special Collections, this exhibition reflects academic study and the social scene, from rock and jazz to classical, from amateur to professional.

The exhibition runs from 16 February to 20 March 2015. There will be a special opening on Saturday 21 March 12pm-4pm, in conjunction with Beethovathon at the Turner Sims Concert Hall.

A private view and drinks reception will take place on Thursday 26 February 5pm-7pm.  All are welcome.

Where to find the Gallery:
The Special Collections Gallery is situated on Level 4 of the Hartley Library, University of Southampton. The Library is on the east side of the University Road, on the University’s Highfield campus.

Opening hours:
During exhibitions the Special Collections Gallery is open to the public Monday to Friday 1000 to 1600. Admission is free. Visitors may be asked for proof of identity by Library Reception staff.

In the run-up to Valentine’s Day this coming Saturday, Professor Chris Woolgar of the Faculty of Humanities reflects on the development of valentines.

Marking Valentine’s Day with a personal note to one’s beloved was in practice established by the end of the eighteenth century. Developments in patterns of communication and technologies for making stationery in the first half of the nineteenth century brought dramatic changes in the possibilities for 14 February. Written communication at the start of the century was an elite practice; with a few exceptions, largely in major urban areas, sending letters was expensive, and depended on distance and numbers of sheets of paper. The urban postal market was developed particularly in London and the first part of the nineteenth century made communication much cheaper. But the real change came with the introduction of uniform penny postage, in 1840. That year the number of letters delivered doubled; in 1841, 169 million were delivered, and more than 400 million were delivered in 1853. The interest in valentines can be seen in the weekly statistics of the postal system: at a point when Christmas barely made a mark, in the second week of February 1841 an extra half million letters were delivered, one eighth of all the mail, because of the traffic in valentines. The great expansion in postal traffic was especially important for two constituencies: one was advertising and ‘junk mail’, the other was the possibilities it gave women for sending and receiving letters. This latter immediately raised questions of morality, of the potential for women to write to and to receive letters from people who were unknown to them. Valentines encapsulated this development. 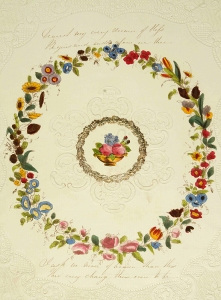 The second change was in terms of the production of stationery. Developments like embossing paper appeared at the start of the nineteenth century, and there was fine stationery for ladies on the market by the late 1810s; by the 1830s engraved views were commonly added to higher-class products. Paper production itself expanded very greatly through the 1830s and 1840s, with the widespread use of machine-made paper; and printing techniques also increased the range of possibilities for circulating text, and for decoration. In a mass market, however, it was important to maintain a personal aspect, especially in intimate matters — and a handwritten note was essential (it is for this reason that even to this day invitation cards use scripts that imitate handwriting). In terms of valentines, more expensive products incorporated this personal element: the designs in the middle part of the market were often handwritten, or hand-coloured; the more exceptional products had additions of lace, or cut paper. The cards were probably largely produced by women, because of their dexterity in fine work — and we know from the style of handwriting that many of the verses on the cards were copied out by women as part of the production process. The cards are difficult to date precisely, but the paper sometimes has watermarks which will tell us in which year it was made — so it is possible to establish a general chronology. A sense of privacy and intimacy was implicit in communications of this sort, and another development of the 1830s, the introduction of envelopes (as opposed to using sealed, folded paper wrappers), facilitated the romantic transaction. 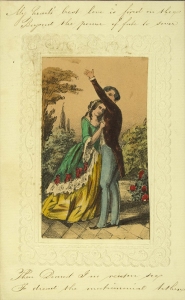 Illustration from a nineteenth century valentine card from the collection BR46

The third great change — and the prime mover in the development of the valentine — was one of sentiment. Romance, from the three-decker novel to lover’s tokens, had a major impact on popular culture. The range of valentines can be seen in the Broadlands Archives, which contain a group of some 340, largely from the 1830s and 1840s. They represent the stock of a stationer’s, and were purchased by W.W.Ashley, Lord Mount Temple, in June 1910 from a London bookseller (this is one of several additional groups of archive material which he purchased, including, for example, papers of the Prime Minister, the second Viscount Melbourne). All the cards are different, and all are presumably unused. One can imagine they formed the stock of a shop such as the one that fascinated Sam Weller in Pickwick Papers (1837):

‘The particular picture on which Sam Weller’s eyes were fixed, as he said this, was a highly coloured representation of a couple of human hearts skewered together with an arrow, cooking before a cheerful fire, while a male and female cannibal in modern attire, the gentleman being clad in a blue coat and white trousers, and the lady in a deep red pelisse with a parasol of the same, were approaching the meal with hungry eyes, up a serpentine gravel path leading thereunto. A decidedly indelicate young gentleman, in a pair of wings, and nothing else, was depicted as superintending the cooking; a representation of the spire of the church in Langham Place, appeared in the distance; and the whole formed a “valentine” of which, as a written inscription in the window testified, there was a large assortment within …’

The Montefiore Lecture 2015 will take place this evening at the Avenue Campus. Titled ‘Magna Carta, British Values and Religious Minorities’ the lecture will be given by Professor Maleiha Malik, King’s College London. The Montefiore Lecture is part of the Parkes Institute annual lecture series and is the oldest lecture in the University’s calendar.

Claude Joseph Goldsmid Montefiore (1858-1938) was a Jewish theologian, Reform leader and philanthropist. He was the son of Nathaniel Montefiore and Emma Goldsmid, and the great nephew of Sir Moses Montefiore. Noted as a great scholar, Montefiore was educated privately and at Balliol College, Oxford, where he obtained a first class degree. He was Hibbert Lecturer in 1892 and was awarded the British Academy Medal for Biblical Studies in 1930.

The Special Collections Division holds a small collection of Montefiore’s  papers. The collection contains a volume of manuscript notes, chiefly on Aristotle’s politics; an address to Montefiore, written on vellum and signed by members of the senate of University College, Southampton, 1913; a letter from D.D.Balfour, 1885; and a typescript of ‘Some old fashioned opinions and reflections about the Jews: a die-hard’s confession’, 1935. In addition to the manuscript collection, Montefiore donated his private book collection the University which now forms part of the Library’s Printed Special Collections.

It was through the collections of Montefiore and the library of Dr James Parkes that the University formed a special interest in papers concerning the relations of the Jewish people with other peoples. Since 1989 this has been developed with a particular focus on the records of Anglo-Jewry, of national organisations, and of individuals, leading to the acquisition of the Anglo-Jewish Archives in 1990. The Special Collections Division has continued to receive a considerable number of major accessions relating to Anglo-Jewry and this remains an area where collecting is most active.