The Parkes Library, created by Revd Dr James Parkes, who spent much of his life combatting anti-Semitism, contains a sizeable section of printed material on the Holocaust including general histories of the Holocaust, together with books describing events in individual countries. Published diaries and testimonials of victims and survivors are well represented and there are also sections on the interpretation of Holocaust literature and on the historiography of the subject.

Telegram (MS 175/142/1) sent to Hertz in November 1938 using the term ‘Holocaust’ in response to the events of Kristallnacht.

There is considerable material within the Anglo-Jewish Archive collections at Southampton, ranging from a telegram sent to the Chief Rabbi Hertz in November 1938 using the term ‘Holocaust’ in response to the events of Kristallnacht, to memoirs and testimonials and papers relating to war crimes and war criminals.

The writings of Eugene (John) Heimler (MS220) on the Holocaust include some pages of his Holocaust memoir Night in the mist. The collection also includes material relating to the foundation of a Holocaust survivors’ centre. Amongst the papers of the Council of Christians and Jews (MS 65) is material of the Association of Nazi Camp Survivors and of the Holocaust Memorial Foundation Committee. Other smaller collections include an account of the war experiences of David Kutner, who was incarcerated in Lodz ghetto and subsequently Auschwitz, and papers of Rudi Kennedy who led a successful campaign for compensation for Jewish slave labourers.

The Archives and Manuscripts holds two collections of filmed interviews: the Fortunoff Video Collection of Holocaust survivors from Yale University Library, and the Association of Jewish Refugees Refugee Voices, which contains 150 filmed interviews with Jewish survivors and refugees from Nazism who have settled in Great Britain.

An event to mark Holocaust Memorial Day 2015 has been jointly organised by Southampton Solent University and the University of Southampton. For further details please visit the Parkes Institute Events page.

Matthew Brand, who is a post-graduate research student at the University of East Anglia, reflects on his use of the Palmerston collection at Southampton.

“When one thinks of refugees, royalty don’t usually come to mind. This is perhaps also true of the 19th century, when countless European liberals and revolutionaries fled to Britain. However, many politicians and royal families also arrived, including French Kings and their families (Charles X in 1830 and Louis Philippe in 1848), and Spanish pretenders who sought to acquire the throne by force of arms – Don Carlos in 1834, and his son Carlos Luis, Count Montemolin in 1846.

Ships sailing near the Culver Down cliffs

I first made use of the Palmerston Papers for my MA dissertation, and have continued to use them whilst studying for my PhD. The collection is vast in scope; the nineteenth century was an era of ‘government by correspondence’, and private, rather than “official” letters often contained sensitive information.

Among the most intriguing items I have found is a letter from Don Carlos to King William IV, in which Carlos arrogantly excused his departure to lead his troops in a brutal civil war. He also wished that his family, who had remained in Britain, returned to Spain and left the damp English climate behind. Palmerston appears to have kept the letter because Britain did not recognise Carlos as King of Spain.

Other interesting documents include a disagreement between Palmerston and his Ambassador to France, Lord Normanby, in December 1851, about whether French President Louis Napoleon’s coup d’état had been in response to the exiled royal family’s rumoured plots. Another extraordinary exchange, with Prime Minister Lord Grey and Ambassador to France Lord Granville, discusses the potential implications of Charles X and his family’s departure to Austria in 1832. Charles’s daughter-in-law, the Duchesse de Berry, was then evading capture in France after a failed rebellion.

Palmerston’s diaries, draft newspaper articles and correspondence have helped me to piece together the story of a neglected but often important group in Victorian Britain. This fascinating collection and the archivists’ endless patience and professionalism have been of enormous benefit to my research.” 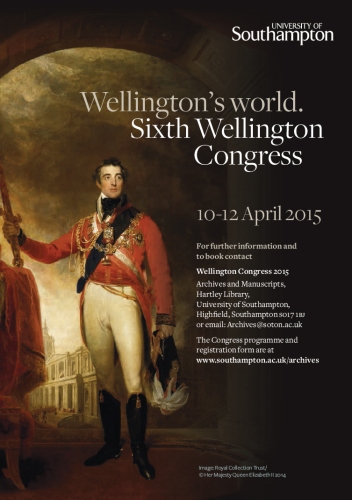 18 June 2015 will mark the 200th anniversary of the Battle of Waterloo, one of the most famous battles in the history of Europe. The battle not only ended the political and military career of Napoleon Bonaparte but also ended the series of wars which had raged across Europe, and other regions of the world, since the French Revolutionary wars of the 1790s.

For the 200th anniversary the University of Southampton will be holding its Sixth Wellington Congress 10-12 April 2015.

Papers will focus on a range of topics covering both Wellington’s military career and the battle of Waterloo as well as political, social and literary topics. Keynote speakers will be Rory Muir, Roger Knight, Will Hay and Chris Woolgar.

On the Friday evening there will be a concert of music from the period at the Turner Sims Concert Hall. Saturday will feature a BBC Battles, Waterloo 200 presentation, a private view of the exhibition Wellington and Waterloo: “The tale is in every Englishman’s mouth” in the Special Collections Gallery, Hartley Library, and a conference dinner.

The University’s Hartley Library is the home of the first Duke of Wellington’s archive, and the meeting will include opportunities to see the collection, as well as a programme of social activities. The event is organised in conjunction with the Southampton Centre for Nineteenth-Century Research.

For further details visit the Special Collections website at:
http://www.southampton.ac.uk/archives/exhibitions/Waterloo2015.html